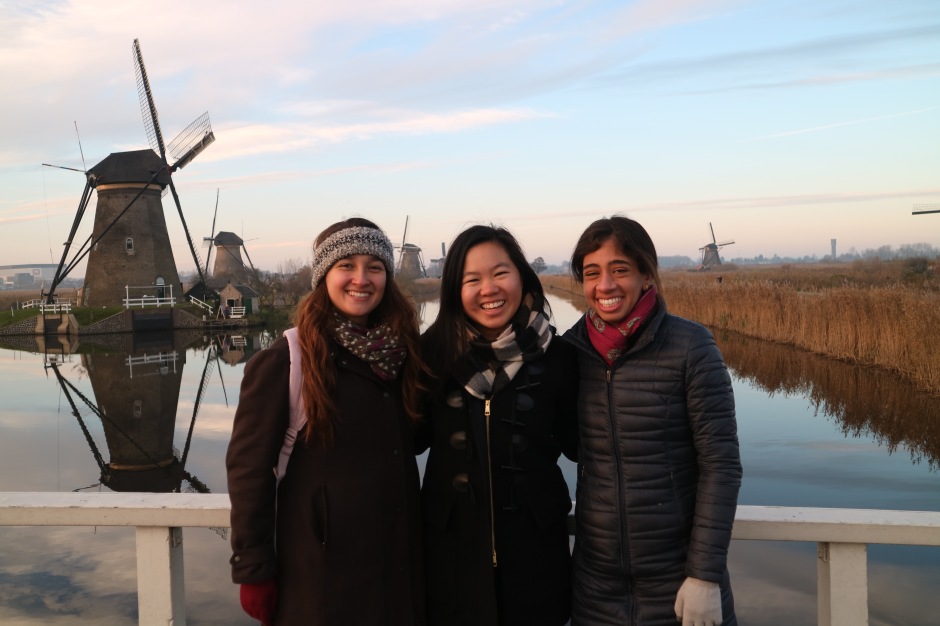 No prize for guessing the location of this particular memory correctly. In the list of thing-that-are-so-Dutch, bicycles and canals rank up there with tulips and windmills. incidentally, the latter feature in this story as well.

I was travelling with two of my dearest friends, Balim and Sunaina. We had decided to skip American Thanksgiving in favour of a trip to Amsterdam. We were dedicated to getting as much out of the Dutch experience as possible. After checking off Rembrandt and stroopwafles, bikes and windmills were in order. We decided to pass through Rotterdam in order to reach Kinderdijk, windmill capital of the Netherlands.

Now, at the time, I was the first to admit that I was pretty Type A. Ok. Very Type A. Make-my-bed-every-morning-type Type A. Consequently, I had planned our trip to Kinderdijk to a tee: walk to the train station, train to Rotterdam, ferry to just outside Kinderdijk, bike to the windmills, repeat on the way back. Simple! Luckily for me, the Netherlands as a country is just about as Type A as it gets. The infrastructure: amazing!

The Erasmus bridge in Rotterdam. 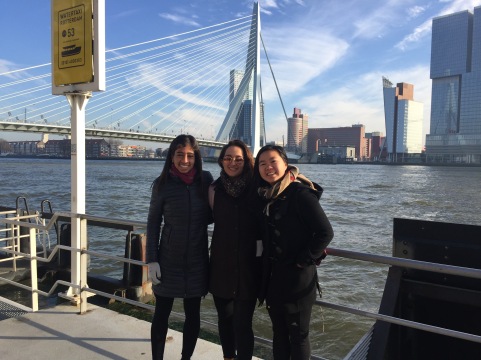 The three of us easily followed my plan and made it to Rotterdam. We had some time to walk around this very cool and industrial city before hopping on our ferry.

After hopping on the ferry, we were making good time to Kinderdijk. So far so good. We were having an (type) A+ day! We hopped off at our spot and walked over to the bike rental store. Alas! Despite all my planning the store was closed for the season. I was a little annoyed but don’t worry, I didn’t spontaneously combust right there and then. My particular brand of type A also includes A for Adaptability. Unfazed, the three of us set out to walk to the windmills instead.

Is there anything lovelier than a nice walk on a beautiful day with friends? Yes. A nice walk plus a hearty meal. After hiking along for quite a while, we stopped in a little pub in order to quell our growling stomachs. And, as luck would have it, the pub also rented out bicycles. Don’t you just love it when things work out?

After our little meal, we each hopped on and did our best impressions of effortlessly chic Dutch bike riders (with varying degrees of success – no surprises as to who was the least graceful). We biked for about ten minutes before finally reaching what we had trekked all this way to see: the stunning windmills of Kinderdijk. We had made it! 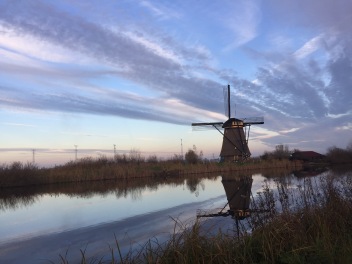 Balim and Sunaina, what a roommate duo!

The three of us excitedly peddled up to the path that would take us in and amongst the mills. We zipped up the land exhilarated at the fact that we were finally here. Now, they say that you never forget how to ride a bike. While this is true, you can certainly be a little rusty after not doing it for a while – a fact that normally wouldn’t be a problem save for the fact that I was surrounded by canals on both sides. This by itself is also not a problem. What really screwed me over were my millennial tendencies. The lovely Balim was right in front of me and she had mastered the art of biking with one hand while taking photos on her phone with the other. Anything you can do I can do better, I thought.

Feet peddling wonkily, handle turning wildly, and hand flailing pointless, I looked less like a effortless Dutch girl and more like a toddler who had just graduated from training wheels to a “big girl bike”. I somehow managed to plunge my hand into my coat pocket and pulled my phone out. Never had I been more frustrated with my lock screen. Suddenly, I careened off the path and had to put both feet down in order to stop myself, phone and all, from plunging into a canal. I stopped seconds away from being drenched in weeds, mill water, and embarrassment. I learned my lesson. Live in the moment. Bike now – pics later.

I caught up to the other two and pretended like nothing happened. Not that they would have cared – they were two busy being mesmerised by the rosy sunset that was happening before our eyes. As we turned around to head back the way we came, the sky was slowly painted different shades of pink and orange. Sunset’s are natures version of HD TV. Never static, the colours faded into one another with each passing minute being somehow more beautiful than the last. We were speechless. 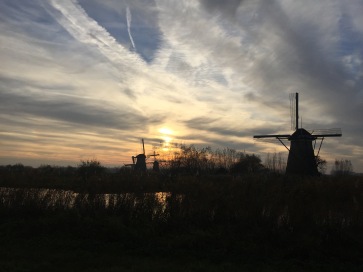 While peddling along in silence, I reflected on yet another lesson I had learned that day. Sometimes, the most Type A and thorough plans fall through for a reason. Had we rented the bikes from the ferry stop, we would have come and gone too early to witness the silhouettes of the windmills against the beautiful magenta sky. We would have completely missed the beautiful show that mother nature had put on for us. It was as if She herself had closed the first bike rental shop in order to ensure that we would arrive at the mills at the perfect time of day.

When we got back and returned our bikes, we realised that we had in fact missed the last ferry back. Somehow wiser and decidedly more chill than I was this morning, I laughed off the scheduling error and simply asked a local how we could get back to Rotterdam. She pointed us to a bus stop where the three of us waited patiently, still savouring the last of the ever-changing sky. 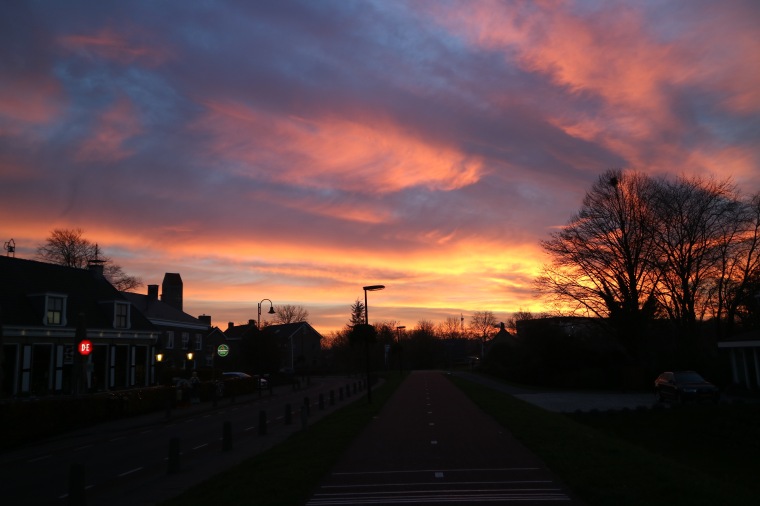 The whole experience is truly one that I will never forget. I wouldn’t say that I am no longer Type A. Nor would I say that I’ve turned my back on my picture-taking millennial roots (as exhibited by all the pics that I ended up with in spite of my near disaster with the canal). However, I do find myself putting the phone down more and living more in the moment and I would now call myself Type A-. I still make my bed everyday and my Google calendar is as color-coordinated as ever. But whenever I miss a bus or take a wrong turn, instead of freaking out, I remember the sunset, the windmills, and that one time I almost biked into a canal. 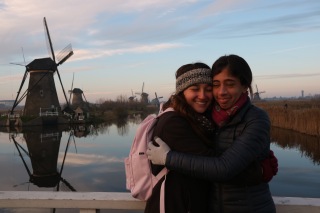 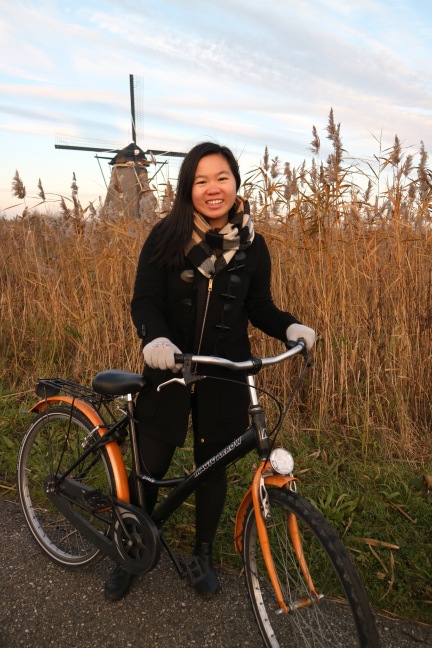 Hello!
Welcome to my blog. I have always loved to write and to tell stories. So, I finally decided to bite the bullet and create, well, whatever this is! I hope that something within these posts makes you laugh, moves you, or is otherwise relatable. I’m just having fun with it and I hope you are too!

Big day for William M. Delaney! 🍾Wish him happy birthday and he just might reveal what the “M” stands for (laMont? econoMetrics?)
Having a heated discussion about a lack of treats
Japan has a lot of Kit Kat but nothing beats this Cat 😻
Alexa, play Yellow, the Chinese version (duh)🧧Happy CNY!
When they tell you to french fry but you only know pizza 🍕
New year, same chaotic energy. What will we manifest next?
%d bloggers like this: